Lasers by The River

What could you do to help the environment? I chose to do a laser light show with music next to the Chicago River to show my neighborhood how they are affecting the planet. I wanted to do it in an interesting way which includes lasers and music. As far as I know, no one has done this before, and I think it would be interesting to see lasers showing the impact that we have on the planet along with a song that talks about climate change.

My idea for something I can do for my block would be putting on a performance with music and lights and maybe some visuals at night.  The music I'm going to be playing Is Billie Elish’s All The Good Girls Go to Hell. If I wanted to do this I might need some lights, a laser light projector, a projector screen, and speakers.  I would show images of plants, animals, and damage to the environment.  I think it will help my neighborhood because it will show how beautiful nature is and why we should strive to protect it. It would be a good thing for people to see just how pretty nature and music together can be while at the same time showing how nature is being destroyed.

The reason I chose my musical installation is because it shows how music, technology, and nature can work together to teach my neighborhood that nature can be beautiful if it is protected. A great example of this working together would be “Zoo Lights” which is something they do in Lincoln Park Zoo around Christmas time. They cover all of the trees in colorful lights and play music, which is kind of what I am going for my installation albeit on a much smaller scale. I can use the lasers to project animals, plants, and maybe some other nature and music-themed things that go with the music. I can also use the lights to light up the surrounding areas and make it easy for people to find the location, but then dim the lights and change the colors and lasers according to the music that is playing or just the natural sounds. I might use visuals of water or other forests, but I don’t want that to be distracting to the surrounding areas and the music. I don’t have an exact reason I think I should be chosen, but I think it would be a fun project to do to show the wonders of nature and music. In addition, it would be a fun bonding event for my neighborhood.

I chose an area right next to the Chicago River. One of the reasons I chose this location was that it will give people a chance to be outside and not cooped up in their homes. I also chose it because it would be a great place, in general, to talk with people and have a small social gathering. Of course, social distancing would still be enforced along with everyone being required to wear a mask. The reason I chose it to be in person rather than virtual is because none of the effects I plan on using would go over as well on camera. It also gives people a reason to interact with each other. This installation will benefit my neighborhood by showing them how beautiful nature, music, and technology can be together.  I also think it would benefit people because people would be itching for a reason to leave their house and since the neighborhood is so close-knit. Everyone would be wanting to talk with each other to see how they are doing.

My installation will benefit my community by inspiring people to clean up the natural environment. It will accomplish this by exploring the beauty of nature and why it should be protected. The scenery and the show will help people see how pretty the environment is. Think of it as a save the environment rally. The beginning of the presentation will be showing the environment before we as people started to destroy it.  As the presentation continues, the lasers will start to show the negative impact on nature like fires and pollution. This project is supposed to teach people about the effect climate change is having on the planet and inspire them to stand up and actively make a change.

The song I plan on playing for the show is going to be All The Good Girls Go to Hell By Billie Elish. I also plan on writing a script to talk about the dangers of climate change and then record and play it after the show. The reason I chose this song is because it talks about climate change and the effect it has on the environment. I think this song, along with the laser lights showing plants and nature being ruined, will help the people of my neighborhood understand that nature is worth saving as well as the damage we are actively doing when we just sit by and let it happen.

The tempo of the song I chose for my installation is slow which is a good thing. I want the song to sound sad because the topic of climate change is a sad one.  We are actively ruining our planet through littering and forest fires. The meter in the song is 4/4. I think it makes the song all together a very catchy but sad song to listen to.

In conclusion, I chose this project because I want to show the reality of climate change in an interesting way. I specifically want to inform people about the effects it’s having on our planet. I hope that this project will inspire people to start taking initiative and clean up the environment. 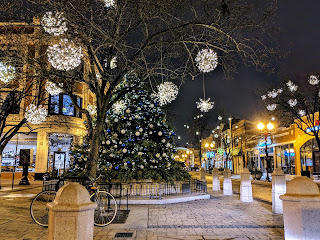 Action Project Where i'm from

I'm from Chicago in an area called Lincoln Square. It always looks incredibly pretty during Christmas time. Some of my favorite moments from there are shopping with my family for each other Christmas presents. It always smells like a bunch of different foods due to their being multiple restaurants. Another get-together is the Farmers Market, Which always has lots of good food for people to buy and try. Lincoln Square is one of my favorite places to go when I have spare time to buy food I like and things for my family.  *Lincoln square during Chrismas time  Sources cited  Google.com

For this project, we were asked to build a water filter and measure all of the contaminants. Then put the results as decimals, fractions, and algorithms as I was building my water filter I thought to myself "this is never going to be very good after all I'm putting it all together all willy nilly." I was pleasantly surprised when I  tested my water. I thought it was not going to look very different than the water I put in but I was very wrong. Down below you will see a slideshow of the process it took me to get here, the measurements, and the final product I still wouldn't drink the water but for someone who put a bunch of stuff together and hoped for the best, I think I did pretty good.